The frame is rectangular… t’is the photographer that is a bit obtuse.

Endure, 35 x 29 inches, watercolor and colored pencil, mounted on gouache painted board, and embellished with beads, ribbon, and handmade lace.  Thanks for looking!

Edit Note: deleted tangent ramblings… better for me, better for the blog.

My word for 2016 is Change, if I go by one of those silly Facebook quizzes.

Today I mourn the loss of an old friend and muse, a very talented artist and writer that I met at the Trumbull Art Gallery in 1996.  Oh, he is still very much alive.  He de-friended me via text, slamming 8 into my phone, having drawn conclusions on limited information. Even that is my fault… I closed ranks and kept secrets, lied by omission on things I wasn’t ready or able to talk about.

Must friends disclose all?

Some things are not really anyone else’s business… certainly did not think it would have a bearing on our friendship. He is right on one thing, his “u suck as a friend” because I have often been distracted or cut conversations short lately, but not always for the reasons he thinks.  No reason to text back, odds are that he had already blocked my number, obviously not interested in anything I have to say, so I mailed a goodbye letter with “no reply expected” scrawled on the back of the envelope.

Oh well… it was his choice to de-friend me.

Question:  Is it “emotional cheating” to talk/text with an old friend of the same gender as your lover?

That’s one of the things he accused me of… that’s the root of it.  He’s hurt that I did not tell him that I was quietly seeing someone, but that was none of his business.  He thinks I should have told him sooner, that friends don’t keep secrets… I almost told him many times, laid enough hints for him to guess, kind of waiting for a clue to open the conversation, but maybe something inside me always knew that when I did tell him, he would say good-bye.

I can deal with good-bye.

Hell, I grew up saying good-bye… we moved about once a year. I attended 13 schools before High School graduation, 14 if you count both vocational schools. I learned young that there was no see ya later, that attempts to stay in contact with friends via letters or phone calls would eventually fade, that when it was time to say good-bye, it was a good-bye. I’ve actually said “it’s been nice knowing you, have a good life” to some of my best friends, knowing damn well that I would never see them again.

He is right that I have changed, haven’t been my old self lately, and that’s evident even in this blog. Just look at my “recent” posts, clues in the topics: Clarity, Iron in the Fire, Pumpernickel, Wired. Download and look at that print-able PDF chart from Iron in the Fire, look at the bottom of it to see what else I started tracking, along with sleep patterns and moods. Yeah, it’s coded for self-meds:  Al, Wd, Fd, Ex.

Barnbees, one slightly messed up woman… that says it all, eh?

But, you know what? I am stronger now than I have ever been.  I’m just me… flaws and all.

Yes, I have some issues, but they are my issues. I work on them because, bottom line, I like me… yes, I am selfish like that. I love life, I  like being me. If I think working on something, like learning how to live with this bipolar thing more effectively will make my life better, so be it… I am not trying to fix me to please anyone else, but me. I come “as is” so if you like me, fine… if not, oh well.

That’s an artist skin… when you make art and throw it out to the world, some people will like it and others will hate it. I don’t make art to please other people. If they like it, fine… if not, oh well.

Here is my first art of 2016… first art I’ve been able to finish in awhile (been scattered a bit). My sister gave me a block of 100% cotton watercolor paper, a brand I never tried before, and sent a few pencils, too. So, this drawing was pretty much just to test the new paper, to see how many layers it can handle, light or heavy handed, &c. Then I inked it so I will know how ink behaves over oil based colored pencils on this paper. Not my best, but okay for a first in a long time, colors faded by poor photography on the lower end.

Thanks for reading… I haven’t been reading blogs lately, my apologies, there are a lot of things I need to start doing again. 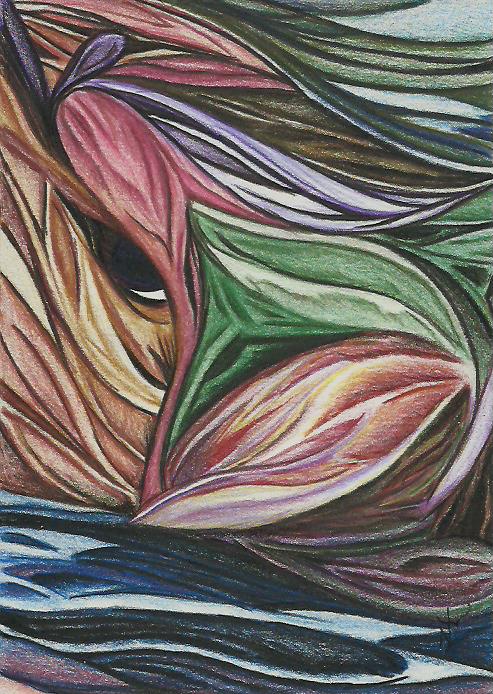 Chopped drawing takes a spin,
A heavy hand with a dark line.
Who is afraid of color?
Push the mood to match the mind.

It is only paper,
Sweet blessed cotton,
So what if it comes out sad,
If artistic skills are rotten?

It is just paper,
Disposable, biodegradable rag,
Scratched in stubby pencil
By the hands of this old hag.