I put on a pot of tea today, not doing well, weak as hell but can’t complain. Today’s brew is Tawantin Black Tea, which is not as purple as the Peruvian Spiced Berry in the photo’s cup. Yeah, snapped that photo weeks ago in kind of a show n’ tell after my cousin turned me on to Cleveland’s own Inca Tea.

I like the black. To be straight up and honest, I’m not that into tea so I’m still slowly tasting all the varieties that came in the Sample Box. So far, so good… most days, I opt for coffee. Sumatra is my favorite.

As for Troubles… I’ve had enough.

My little mask sewing obsession quieted itself. Suppose I should update Mice4Mars, sell off leftovers on eBay or something, but oh well. I just got tired of assholes claiming this virus would magically disappear on election day, mostly from idiots who now support a wannabe fascist dictator’s attempt to undermine our democratic process by overthrowing the results of an election. People are dying and they don’t care… it’s just a political ploy, a media hoax? Yeah, until you run out of fingers counting names familiar to your own self amongst the critically ill or worse. Bump the conspiracy bull.

I want to make paper.

I don’t have any proper screens for that, but I have two thin wooden picture frames, just cheap things sold as craft supplies to decorate yourself, and some scraps of window screen somewhere in this room. I don’t own a blender either, but I could maybe use one of those bullet smoothie things to make pulp, maybe the cup for chopping nuts. Those 4×6 picture frames would mold 3.75 x 5.75 inch paper, with rounded corners. Folded in half, hand stitched spine, would make nice little books. Or even as flat sheets, I could paint on them or something.

Why? Is bigger better? Ironically, I’ve always been too big. Everyone always trying to cut me down to size. Too this, too that, too much. Bump that, too.

My cup is empty. Thanks for reading.

Haven’t shared any Fave Tunes lately, so check out this totally cool 11th century Hurdy-Gurdy being played in this YouTube video of an old song about the Great Mississippi Flood of 1927.

This is Black History month, so you might want to take a minute to read about that flood. Google if you don’t like to click links. I read that and thought oh my… the living conditions in the tent cities set up for black victims of the flood was so inhumane that it is beyond comprehension.

Make America Great Again? Pick a year! Wake up people. When, pray tell, was it actually great for all Americans? Certainly not 1927. Can you find ANY era of peace, prosperity, and justice for all? The history of racist bull in this country is so horrid that I cringe if I to have to check a box next to the word “white” on anything because I don’t want to be lumped into the same category with paranoid MAGA hat wearing white supremacist types. I’ve been tempted to click the “other” box. What if we all clicked other? Black, white… those are Crayola colors. If we are going to label diverse groups of people into generic colors to simplify discrimination, why not use the whole box of 8? Trump’s orange; the main purpose for his wall is to keep brown people out. Any blue Smurfs out there?

Yeah, I hear people say, “I voted for Trump, but I’m not racist.”

I’m curious, if you bought that MAGA nonsense hook, line, and sinker. Tell me when and why. What year, time period, or era does the “again” in MAGA imply? Why do you romanticize that particular time? Then google it… do your homework, learn a little history. Was it really so great?

Sorry, I got side tracked on a soapbox.

“When the Levee Breaks” was written by Kansas Joe McCoy. If you want to hear the original sung by McCoy and his wife, Memphis Minnie, you can find it on YouTube.

The levee in the song holds back flood waters, but the first time I heard Led Zeppelin’s version, I was “going down, going down now” in my first major battle with my arch nemesis, depression. I was 14 and suicidal, too locked inside myself to ask for help. I’m still prone to depressions; learned how to recognize the symptoms so I can usually keep that bee at bay.

“Cryin’ won’t help you, prayin’ won’t do you no good, when that levee breaks, mama, you got to move.“

Today, it strikes a different chord. I’m keeping an eye on a levee. If it ever breaks, I’ve got to move. Now I don’t mean pack up all my stuff and throw it in a U-haul to go live someplace else. The “levee” is a situation and “move” is to take swift positive action. What that will be, I don’t know yet. I’m trying to prepare myself. I want to be able to act instead of react.

I’m back to playing with words again, after binge watching 8 seasons of “Shameless” on Netflix.  Considering that I’m not one to lay around watching TV,  that pretty much says everything.

Yeah, I was a bit depressed, let a down day stretch into a few. I tried drawing, took watercolor pencils out to the porch. It didn’t help. Too many echos of other people’s words in my head, cutting me down, colossal waste of time. Do I hear voices? No, just audio memories.

Doc finally listened to me, changed my script to Lexapro, but I’ve been holding off on taking them. Best to let time pass, make sure that Wellbutrin is totally out of my system (has been, odds are was out before she wrote the script) but the real deal is I’m trying to ride it out. Depression is a riptide. Sometimes, you just have to float awhile.

The TV was off when the vet startled me with words at my open window. I was on this computer, revising a poem. He came to swipe the last few green tomatoes. I don’t know how long he was standing there. He could have been watching me for awhile. My writing is private. I toss words to the wind via this internet as public as can be; but, I don’t share anything that I write with him.

There’s still a hint of awkwardness between us, but not as awkward as it used to be.

Oh, he still has a burr about being “put out” even though I didn’t put him out… he left. There is a difference. Besides, one has to be IN before they can be put OUT and he was never fully committed, didn’t trust me enough to actually move in. He just stayed with me when and if he felt like it, came and went as he pleased, which dwindled from mostly here to an average of mostly gone over the last year. We broke up on 4th of July because I thought he was cheating on me. That freshly cut house key on his key chain was the last straw. He refused to tell me whose door it opened, couldn’t even tell me who cooked the chicken, so I figured he didn’t need a key to mine.

In all fairness, it’s not like I ever had a key to his place.

Was he cheating? He says no… all evidence points to the contraire. I ask myself questions: Does it really matter? What do I want out of this? He knows, just as well as I do, that most women won’t put up with his shit. Even if he finds someone else to play with, it’s only a matter of time before they say BYE and now he knows that I won’t put up with THAT shit, even if he never admits it.

I don’t know what the future holds.  I do know this awkwardness has to be completely gone BEFORE he brings his granddaughter over here to spend the night as kids pick up on everything… he doesn’t want her to visit with him at his apartment, says it is too crazy there. Well, yeah… if that’s where you party so you got crackerjacks knocking on your door at all hours, that’s no place for a child.

Bottom line, we still love each other. Maybe we will work it out, maybe we won’t… time will tell.

Sometimes I feel like his pot of soup bones, that he’s just trying to keep me on the back burner for awhile, boil me down slow, stir me with a hug and a kiss now and then while he figures out exactly what he wants.

Well, I have nothing else to do… as in, no desire to seek a new romance or anything. No desire to do much of nothing with this depression hanging over me.

To help pull myself out of this funk, I’m making PDF versions of those little chapbooks that I used to make when I lived downtown. Plan is to post them on YBWorks.com (my other WordPress blog) so anyone can print and fold their own copy. The first went up the other day, if you want to look.

I’m just going to have to make myself go places and do stuff… been floating long enough, about time to swim like hell but I don’t have the energy. Not yet… takes all I can do to hide this and pretend to be normal around other people.

I started knitting a thin scarf awhile back, something to wear with a brown sweater this winter.  It’s slow going as I’m not into it at all. What I really want is a shawl so I regret not casting on enough stitches. I had another ball of yarn so I started a shawl in Solomon’s Knot last night.  My last gift from my grandmother was in Solomon’s Knot so there is sentimentality in the pattern. 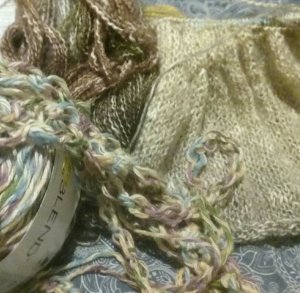 I feel like I need to finish something. I haven’t even finished the room that I started painting in July. All it needs is door and window trim, then get someone to help me hang the wallpaper border. I told the vet that I am going to move my kitchen table in there so I can use it as a work table and the man rolled his eyes.

Yes, literally. He actually rolled his eyes at me tonight. As if I’m not going to actually use that room for anything but storage. I’m supposed to be working on me, getting my “me” back… well, THAT ME makes art and all sorts of crap. All I need is a new kitchen table to replace this one and right now, I don’t care if it is a cheap folding card table, just something to put in the kitchen until I find something else as I’m going to get that room done this weekend.

Yeah, keep on rolling those eyes… I’m defiant enough to prove him wrong.