I had a little ball of yarn and a hook that did not make it into a box yet, so I’m crocheting a garland of Solomon’s knots, a chain stitch my grandma Goldie taught me when I was just a young girl.

I should be packing like a crazy woman, but oh well… I’m not working on a Sunday. That’s my excuse, or it was, as it is now officially Monday.  I just updated my previous post with a YouTube video so now I have “Blue on Black” stuck in my head.

Amazingly, I have listened to more music this year than I have in ten, thanks to that little Blue Tiger sound pod, a Pandora Radio app on my cell phone, and Spotify on the tablet.

MONDAY: once again, I start a post and finish later.

The lyrics, “Blue on black, tears on a river, push on a shove, it don’t mean much. Joker on jack, match on a fire, cold on ice, a dead man’s touch. Whisper on a scream, doesn’t change a thing, don’t bring you back, blue on black” ring especially true this year.

I have whispered on silent screams and cried tears on rivers of grief.  Too many friends, relatives, former classmates, acquaintances, neighbors, and even my cat have died. It seems like an Angel of Death has been harvesting from my neck of the woods over the last year or so and it is not over yet. Just yesterday, on 9-11, a massive stroke claimed a dear friend’s sister.

The Goldie Garland is appropriate because I’m doing a quiet memorial, blended in, on a Christmas tree this year. That’s what the clay drop ornaments are for… no, I’m not making one per person, I just cut out a bunch… didn’t count them. Bit morbid? Nah… just acknowledging the grief that lingers and infiltrates everything without suffocating anything, if that makes sense. People live and laugh and breathe and die… that’s life. I want to remember those I had the privilege of meeting, of sharing time when our paths crossed, to smile over the memories. I want to celebrate the lives they lived and not get bogged down because they died.

I’ve gone bonkers for fingerless mittens.  So far, I have purchased three pairs, chopped fingers off gloves, and taught myself basic knitting to make four pairs out of yarn.  I have experimented with thumb holes and partial thumbs and played with stitch counts to adjust the size.   Then I switched to crochet thread and picked up a hook to make this black pair. I like the copper bracelet on top. Should I make one for the other hand? 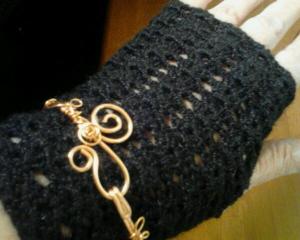 I like the Bernat® Handicrafter® acrylic crochet thread because it is as soft as yarn but firmer, if that makes sense.   The light weight thread will make fingerless mittens ideal for mild weather wear in late spring so I bought “crisp linen” and the variegated “adrift” colors yesterday, as well as spool of Aunt Lydia’s® Iced Bamboo™ crochet thread in a color called Pink Ice.

I also searched the internet looking for patterns.  Tell you true – if you can knit or crochet two squares, you do not need a pattern to make a simple pair of fingerless gloves!

That’s all it is… a simple square of any stitch design is folded in half, then sewn up the side with about two inches left unsewn for the thumb hole.  (Most patterns say sew down one inch from the top, leave one and a half inches for the thumb opening, then sew the rest of the way down.  For my hands, I like a little more on top, say an inch and a quarter, with a two inch thumb hole.)  There is no “right” or “left” hand, both are made the same. 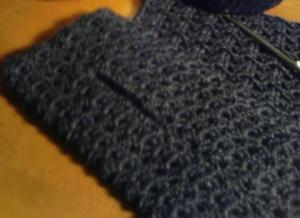 So, how big do you make a square?  Well, that depends on your hands, if you want them to fit snug or loose, how heavy or stretchy the yard is, and if you plan to wear them alone or over a pair of gloves.  I have a seven inch wrist and the measurement around my knuckles is 7.5 inches, so a 7 inch squares turns out best for me.  My first pairs were made bigger and the mittens felt too loose. For the black pair, I used 6.5 inches square.   Of course, they don’t have to be squares.  The length can be varied.  I also prefer to knit in the round on double points for knitted versions to avoid sewing the sides.

Oh I have gone bonkers, completely mad for fingerless mittens.  The thought of sewing some just popped into my head.  Of course, the fabric would need a bit of stretch… fleece, jersey knits, recycled T-shirts?  Stretch denims? Oh… what about that velvet knit in my fabric bin?  They could be adorned with lace…