Take a walk down the street and every building tells a story.

I recently read a comment on Facebook about the building I live in, how ugly it is, that they could not see how the design was ever approved, the statue turned his back, that kind of negativity.   Believe it or not, I didn’t bite.   People are allowed to be ignorant, stuck in time warps, or otherwise wacked.  To each their own, everyone has an opinion, and why bother? Nothing I could say would change their mind.  Besides, I wasn’t sure if they seriously hated 1980 Modernism design or if their prejudice against the occupants was showing.

Fact is, International Towers is NOT the ONLY building to reflect life after 1925.   Directly across Boardman Street, with a front also facing Market, is the 1965 Legal Arts Center.  Okay, so that is a sad example as the building stands empty in dire need of repairs, but look around.  Los Gallos just opened in the Plaza deck, built in the 1970s, there’s the Voinovich Center, Turner Technologies, a bank with the glass thing going on, all sorts of buildings that reflect the era in which they were built.  Have you seen the post office?  Imagine if the Covelli Center, one of the more recent additions to downtown building structures, was forced to adhere to a hundred year old designs to match styles with Stambaugh Auditorium?

Hey, I’m an artist.  I like the contrast between old and new, tension and balance, light and shadow, and everything else going on.  The glory is in the details.  The grand old buildings are what they are, absolutely grand.  But take the plain façade of oh… say the Harshman building.  Look up, there is a cool relief in the design.  All of these buildings interact in the shared space called downtown Youngstown.   They are as diverse as the people.

Back around to the OTHER possible reason the commenter hates International Towers.

It is the age old story of the haves verses the have not.  International Towers was built in 1980 as a low income housing project designed specifically for elderly and disabled tenants.  Gutknecht Towers and Amedia Plaza are two other senior housing projects in high rise buildings downtown.  Add them up… how many apartments total?  I think International Towers has 173 one bedroom units.  I don’t know how many apartments are in the other buildings, nor do I know the occupancy rates.  Counting apartments would only give a rough estimate anyway considering that some elderly people are married.  The fact is, there are literally hundreds of low income elderly and/or disabled persons living right smack downtown Youngstown.   That is rarely, if ever, mentioned in articles tooting city revitalization.  But, of course, they are trying to sell downtown Youngstown as the hip cool place for “young professionals” to live and work.   Actually, improvements made for “young professionals” benefits everyone as who really cares if the elderly have a grocery store within walking distance?

I think it has to do with stereotypes.  Just the word “projects” conjures up all sorts of negative perceptions, everything from leeches on society, too lazy to use a bar of soap, drunks and druggies and criminals and welfare mothers popping babes out like PEZ dispensers, to name a few.  Some people would prefer old people be shipped off to live and work on rat infested potato farms, as some old people were years ago. (My father told me about an old guy he knew when he was a kid, how the old guy got sent to a potato farm.  The conditions were so deplorable that he ran away, hitched a ride and spent the rest of his life living in an old shanty shack in fear they would make him go back.)  It is the climate of the nation, the shunning of people who receive “government handouts” in a time when even social security benefits are considered “entitlements” instead of an insurance that people paid into via payroll deductions.   I don’t like the rhetoric as it reminds me of pre-war Germany when the Nazis distributed propaganda about how old or disabled people were burdens on society.

Some people ignorantly assume that government subsidized housing means “free” rent personally paid by their own taxes.  I’ve heard this from people who don’t even really pay federal taxes as every penny they paid via payroll deductions was refunded at tax time.   I can recall a year that I told one of those people how much I had paid in (more than some people live on) and they were like wow, you are going to get a really nice refund.  No, I still had to write the IRS a check.  But even if you do pay taxes, what’s with the attitudes?   Only a small percentage of the federal budget is designated for domestic programs and why can’t we help our own?

Especially in this area, we should know. We should have more compassion. Life can spin on a dime real quick, good paying jobs can end on a Black Monday, companies fold or relocate manufacturing overseas, up and down and all around, we have been through it, that’s just life, and we survive.

Maybe it is fear talking? Shame the less fortunate lest you become one of them.

A few years ago, I started telling people who spout off nonsense about “MY taxes paid for that” that THEIR taxes are earmarked for congressional toilet paper, foreign made ammunition, and rebuilding OTHER countries after we bomb them.   Only taxes from liberals fund domestic programs. Yes, I made that up, but come on… why not fight stupidity with nonsense?

Should I debunk the idea that income based housing is free rent?

Okay, you guys are smart people.  Do the math.

Firstly, eligible tenants with incomes no higher that 60% of the median income for their defined regions must occupy no less than 90% of subsidized housing units. For the Youngstown Warren metro area, the  60% cap is $22,260 for an individual (or $25,920 for a household of two)  on the 2013 HUD chart. Secondly, the tenant’s share of the rent is 30% of their income and the government pays the rest. So, let’s KEEP IT SIMPLE.  The actual formula is complicated, takes other things like insurance and documentable medical costs into consideration, so to keep it simple, let us do the math on the basic numbers just to get a rough estimate of exactly what 30% of income is for someone at the high end of poor.  Okay,  30% of $22,260 is $6678, divide by 12 and the tenant pays ye $556 a month rent and the government pays the rest.  Doing the same simplified math for a married couple with an income of $25,920 estimates $648.  Naturally, most seniors in low income housing have lower incomes as those at the high end of poor can find cheaper rent elsewhere.   What they can’t always find elsewhere are necessary amenities like handicap accessibility.

All I am saying is like it or not, old and/or disabled people live here, too.

We are a diverse population… young and old, rich or poor, the retired working class or business professional, we all make up the fabric of this city.  From the homeless to the professionals, we all walk the same sidewalks.   So the next time you walk down the sidewalk, try to observe without judgment, soak in the details of the various architecture and appreciate the diversity.

This is “too long” so I seriously doubt if anyone reads it. If you have, I thank you. Sometimes, I just have to write it all out. If you just scrolled down, here’s some photos to show the diversity of buildings in downtown Youngstown (most are from the media gallery): (BTW, the gray building on the right is International Towers) 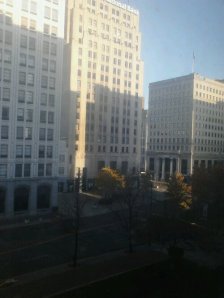 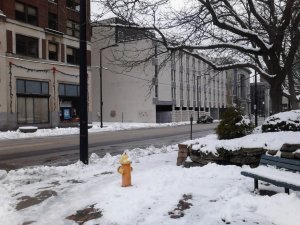 Looking up Boardman St.  The empty Legal Arts Center (HUB building) is next up from the Ohio One building.