Beware the Ides of March… ironically, it is primary election day here in Ohio. 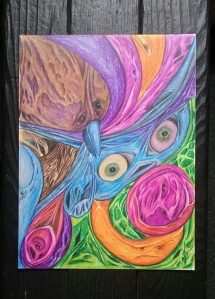 No, that is not a portrait of Presidential candidates. It is a glorified doodle… I was coloring with the boys, my 3 and 4 year old grandsons, while their mama ran errands. Surprisingly, it was the youngest who asked me to break out the colored pencils. It is usually their sister, who was at school yesterday.

I don’t know who to vote for… my candidate of choice opted not to run.

The way I see it, I have four choices:

I have until the polls close to decide.

In the meanwhile, today is Mr. Marsberry Cat’s 18th unofficial birthday. I don’t know exactly what date he was born, so the Ides of March is a good guess of ye about when. He was the last of the litter, already two or three months old, when we brought him home in Spring of 1998.

I can’t believe that he is still breathing on this planet. Sometimes, I’m not so sure he still is… he sleeps a lot. I’m told that he “rules the roost” around here, but that’s not true. He just thinks he does.