If you steal without replacing the bulb, the crime is too obvious and management responds by not screwing in new ones.  (They tried covering bulbs with protective cages, but dumb criminals stole those, too.) Because of light bulb thefts, our trash rooms are now unlit.  We have to take our trash into small dark, windowless rooms that feel really dank and dirty.  Now our elevators are occasionally dimmed because light bulb thieves have moved on to alternate sources.  This is affecting the quality of life for all tenants, so if you are going to steal light bulbs, do it in a way that brings no harm to anyone else.

This public service message is brought to you by tenants who, shockingly, actually buy their own bulbs. Thanks for reading.

“Find a nice fat girl and you will never go hungry.”

I believe such advice has been quietly handed down, from one old bum to another.  Yes, I am fat. And yes, I have and will and do feed hungry people.  But, there is nice and then there is nice. I am a nice person as in generally being a pleasant person, but if you define nice as a spineless gullible wimp who will do anything to please you, I am not nice at all.

Asking me to make you a plate or a sandwich “to get me through the day” now and then is one thing.  Asking me to go all out baking holiday pies and cookies and other goodies for you is another.

I am not sure what irritates me most – an old goat asking me to bring him an assortment of homemade Christmas goodies when I do my ASSUMED baking OR the fact that he hears what I am saying but he doesn’t listen to me, as if he can veto my opinion or talk me into doing what I don’t want to do.

“Not even for your grandchildren?”

Asking me if the woman who brings my grandchildren over to see me is my sister or telling me that I am so sweet he doesn’t need sugar for his coffee does not flatter me.  I don’t roll like that. Giving me a list of favorite cookies will not put them into my oven.  Asking me to take his Food Stamp card to the store to buy the ingredients to bake his goodies ticks me off.  (I do not get food stamps, I do not know how to use those cards, and I don’t think I am authorized to use his card.)  That’s like asking me to commit a crime.

So here is my message to every old man out there who is trying to get a woman to bake him holiday pies and cookies:

It is NOT hard. Recipes are everywhere. Stores also sell box mixes and ready to bake dough, no measuring required. All you have to do is read and follow directions.

He can’t do that… or at least that is what he said when I gave him a package of “just add water” biscuit mix to go with the tub of yummy homemade cooked in a crook pot beans  (thanks to a recipe by a blog friend) adding, “I’ll just stir it in, it will taste the same anyway.” And yes, he did RUIN good beans stirring in that biscuit mix. When he returned the container unwashed, I could see little globs of white raw flour goo stuck to the sides.  And THAT is why I am NOT baking him cookies! 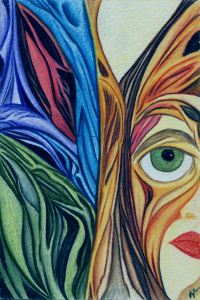 This art looks how I feel.

No, this old goat lives like a homeless dude in an apartment.  His wife died last year and I don’t know what happened, but he did not keep anything from her kitchen.  The man doesn’t even own a pan.  He makes his rounds, playing on the sympathy of single older women, bumming things and trying to find someone to take care of him.  That is NOT going to be me… I have no use for a man who has his priorities so messed up that he cannot meet his own basic needs.  I don’t think he has even purchased a roll of toilet paper since he moved into this building.

He gets away with it because he is nice, recently widowed, and looks like Sam Elliott in an old cowboy biker kind of way.  But that helpless homeless thing he has going on gets on people’s nerves after awhile.  He is like a stray dog with big puppy eyes, but who needs a pet man?

Okay, that’s my vent… my holiday irritation.  What’s yours?

The elusive, reclusive blogger sneaks into the room and quietly types a word.

What should I say?  Should I apologize for going MIA?

There were things I did not want to talk about.

One was being on the art committee of a well established annual show.  It was my first year, so I was a little tentative and didn’t want to say too much about it.  The other was a matter of closing ranks and crawling into myself.  It is all good… I’m going to catch a change stone, flip my world 360, but that can wait for another day.

If I apologize for anything, it should be for not reading blogs.  Writing is like blowing smoke into the cyber air as some of the best posts are never read, so I kind of feel bad for not reading at least those I follow.

Should I end with a photo?  I did not plan on anything.

Oh… here is one of the things I have been doing: matting 60+ small works of art.  I threw this one on the scanner, with a sheet of craft paper behind it.  Thanks for reading!