I come from the era of the skilled trades Walrus Men stranding crossed armed along the wall at the back of the room while union reps and management took turns trying to spin delusions of efforts and false hopes. It did not matter that our plant was profitable. The plan to heavily invest in other countries and move the work overseas had been set in motion years before, so it was only a matter of time before they closed the doors.

On Sunday, I went to an open house event at America Makes on Boardman Street right here in downtown Youngstown, Ohio, to tour the facility and check out the 3D printers. I would have liked to have spent more time inside, but they kept us moving along from station to station fairly quick as it was only a three hour event and word was that people were lined up around the block for a chance to see what goes on there.

Of course, some political groupies went just because our Congressman, Tim Ryan, was to give a speech. I missed that. He was outside yakking at a podium in the display tent (the set-up reminded me of a mini-trade show) while I was inside on the tour. When I walked out, he was talking about birds, ending his speech with something about the bird being in the hands.

Oh well. The last time I heard a Tim Ryan speech in person was at a rally to save our jobs. I still vote for him, but did I mention that I am a bit jaded? I hear words about “additive manufacturing” and 3D printing technology bringing manufacturing jobs back to America, but my experience has left me skeptical. I do not trust large corporations to cooperate with those plans. If they can ship a 3D printer to the space station, companies can ship 3D printers to their factories overseas. Or the technology will be copied, stolen, reverse engineered, or sold to the Nations of Counterfeits.

I had heard about 3D printers. Who hasn’t? It is a machine that works like an inkjet printer only instead of laying down ink, it lays down plastic or some other kind of material and keeps building up layers until it has made something. (Actually, it works more like a programmable CNC milling machine, only instead of having cutters to remove material, it has tooling to add material but I suppose comparing it to an injet printer makes it easier for ordinary people to understand what it does.) What I did not know is that there are several different types of 3D printers and they work on similar principles but they do not all work the same. Some play with plastics like decorating cakes with teeny tiny frosting tubes and some play with lasers moving across thin layers of powdered materials, and some actually play with sand. They made cute little toys and sample things to wow people, moving parts inside of other parts, and showed some artistic and industrial applications, but it is what they didn’t show (partly because it is not here yet) that is the true wow factor. The future of this technology that is still being developed is beyond amazing. They are taking the “what if” to infinite possibilities.

I walked out thinking that I am a dinosaur. Technology has advanced way too far and way too fast. Back in my days at an engineering firm, most everything was in 2D.  One of my jobs was “crushing” 3D AutoCAD drawings of electrical components supplied by vendors into 2D drawings so we could use them as insert-able blocks when drawing panel layouts. Most of the mechanical engineers also worked in 2D. I did take a 3D drawing class after becoming a Tool & Die Maker, but even at that company, 3D was the fun stuff going on in the high tech tool rooms. I completed so many hours as part of my apprenticeship, after which, the only 3D anything I got to play with was a 3-axis milling machine. Now what skills I did had are rusted from lack of use and I kind of feel like most everything I ever knew is now obsolete; gone the way of wing windows, cassette tapes, and rotary phones.

On my way out the door, I picked up a free sample issue of Make magazine.

I am flipping pages and reading articles and the gears in my head are turning again. Right now, I have more questions than answers.  What is this “maker space” and “maker movement” stuff?  My curiosity has been sparked enough to subscribe.  It sounds interesting, even if all I can do is just read about it.

In the meanwhile, I will continue to make things in the old fashioned pitter pat way with hand tools, like some variations on “vintage” style huge kidney ear wires made out of sterling silver (using 21ga. full hard wire for the larger sizes) and an assortment of beaded dangles so I can wear whatever drop on whatever size I feel like wearing that day.  Yes, long post needs a photo of something. 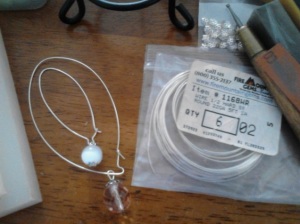